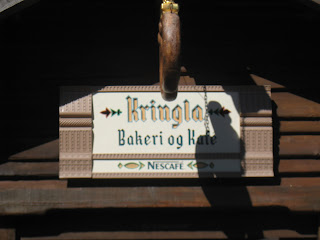 On December 4th I woke my princesses up with an amazing surprise..."Ladies, we are going to Disney!"  I gave them 20 minutes to dress and jump in the car so we could be off to the airport.  Thanks to a quick flight that landed early (!) and an amazingly quick Magical Express and resort check in, I found myself standing in Epcot only 2 hours after my the wheels touched down in Orlando, leaving plenty of time for a counter service lunch.  We headed off to the World Showcase and the Kringla Bakeri og Kafe in the Norway Pavilion.

This tiny little quick service gem is located on the left "corner", just as you turn to head into the back pavilion.  It is a charming little building with a grass roof.  A quick google search on the grass roofs of Norway, yielded a few fun facts.  "Turf Roofs" as they are literally translated, are more than just green in color, they are quite "green" environmentally.  They provide architectural stability, good insulation, are long lasting,  and are not made of petroleum products.  The grass actually is used to hold a layer of birch bark in place which is used to make the roof waterproof.  (Bet you did not expect an architecture lesson in the middle of a dining review...but it is Epcot after all!) 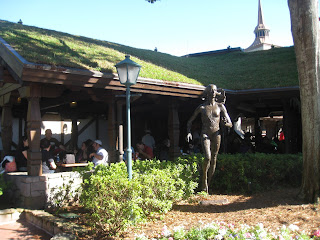 Now back to the fun stuff...  Due to it's small size, I would recommend you check out Kringla at off peak dining times.  The interior of the restaurant is tiny - just a series of refrigerated cases from which you can make your selections with just enough room for you to snake through to the cashier.  There is a small outdoor seating area behind the restaurant, where tables are at a premium.  As you enter the cafe, you will head to the far right corner of the room, where a very small menu board hangs over the sandwich case. 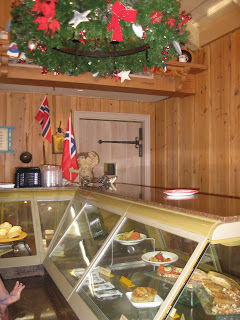 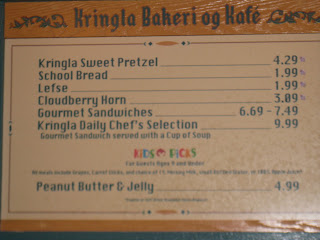 We were taking advantage of the Disney Dining Plan this trip, so we were all set to jump into the Chef's Selection (which was a sandwich along with a side of soup, fruit, or salad).  After checking out the case, the husband and I decided on a club sandwich.  The sandwich was served panini style, so the ham, turkey, and bacon was warm and the melted cheese made it all stick together perfectly.  The real standout was the delicious nutty,seedy, whole grain bread.  Not usually my first choice of bread, so I am glad I was not given a choice, or I would have missed it's toasty deliciousness! 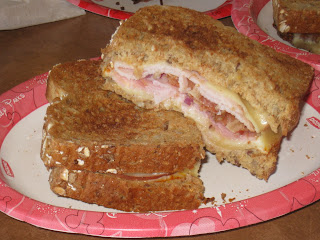 My youngest little sprite ordered the Ham, Cheese & Apple Sandwich.  It was also served on the same delicious bread.  Served warm and toasty, my young one dug right in.  I finally talked her out of a bite and was pleasantly surprised at the flavor combination.  The apples gave a sweet and cinnamony (is that even a word?) touch to the sandwich.  Unexpectedly yummy!
﻿﻿ ﻿﻿ ﻿﻿

My seven year old is a little foodie.  She used to beg me to pack crab stuffed mushrooms for her preschool lunch when she was only three.  I guess it should be no surprise that while we went for sandwiches she went for the Vegetable Torte with Goat Cheese, and of course Cauliflower Soup.  While she thought the torte was fine, she did enjoy the other half of her sisters sandwich more.  I actually agreed.  I thought the texture was a bit rubbery.  I thought it tasted fine - just fine, but I am not a huge goat cheese lover.  If you are, you may have a different opinion.  She did proclaim the Cauliflower soup the best thing she ate all day.  I though it was good, but a bit heavy if Mission Space is your next stop.  Yes, she is a bit of a weird  kid, but I love her adventurous spirit and willingness to try new things!
﻿
﻿﻿

﻿﻿Since we were on the Dining Plan dessert was most definitely on the horizon.  (And even if you are not on the dining plan, I would recommend dessert here!  The dessert case was stocked full of Norwegian deliciousness.  Since four desserts were included, four desserts we got!  We put the desserts in the middle of the table and dove in.  The famous School Bread was also suggested by the server and was hands down our favorite of the lot.  Imagine custardy (I am making up words again) goodness in a sweet, but not too sweet bread topped with coconut.  YUM!  The Cloudberry Horn came in second, followed by the Chocolate Mousse Cake and the Fruity Whipped Cream concoction.  Pear Almond Tart, I am not sure how you escaped my tray, but I am coming for you next time!
﻿﻿﻿﻿
﻿﻿﻿
﻿﻿﻿﻿
﻿ 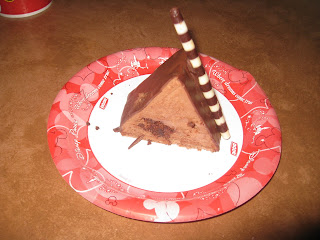 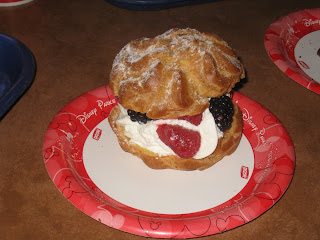 Overall, the Kringla Bakeri og Kafe is a solid counter service dining option, and an absolute stand out if your are on the dining plan.  This little spot is charming and elevates the simple sandwich into something more.  The sandwiches are filling and when combined with a side item and dessert is more than enough for even the biggest eaters.  The cast members are sweet and helpful (and exceedingly blonde!)  It did take a bit longer than I would have expected to get through the line due to a small bottleneck in the drink section.  But it really did not matter, as it almost helped with crowd control in the seating area.