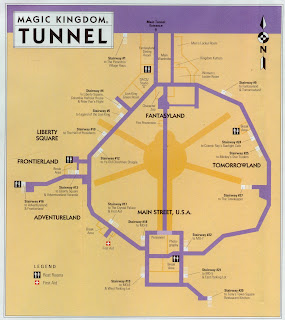 It is one of Disney's not-so-secret-secrets...the maze of tunnels that run under the Magic Kingdom.  The Utility Corridors or "Utilidors" are a fascinating piece of the Disney Puzzle.  It was one of many of Walt's genius ideas that really helps make the Magic Kingdom the most magical place on earth.  As I stroll down Main Street, I cannot help think of the amazing hustle and bustle going on beneath my feet.  The logistics of moving the people, food, and merchandise around the park in any kind of timely manor is just mind boggling!  Spend a few minutes thinking about all of the behind the scenes work that is perfectly synchronized to insure your good time - it kind of makes you appreciate your experience even more.  Here are some fun facts to get you started:

• The tunnels are not actually underground, but are technically the first floor of the Magic Kingdom. Due to the high underground water tables and risk of flooding, the tunnels were built on ground level and covered with dirt excavated from the Seven Seas Lagoon. The Park was built on top of it all, 14 feet above the original grade, which explains the reason you walk up a gentle incline to reach the park.

• The inspiration for the tunnels in Disney World came from Walt Disney himself. Walt thought the cowboy from Adventureland strolling through Tomorrowland to get to his assigned post ruined the magic. The utilidors allow cast members to enter their assigned land via a stairwell from the tunnels.

TV Time: Get in the Mood!

It is hot this week.  And muggy.  I am barricading myself and my children inside during the heat of the day.  We need entertainment.  Our next Disney trip is still a few months away and I need a fix.  I have a simple solution to solve both problems!  I am heading on over to http://www.bartlett-sloan.net/tv/ .  There, you can find a nice compilation of all Disney offerings on TV for the upcoming  week.

The Travel Channel programs on Disney are always a hit in our household.  (Should I be worried that my 6 year old quotes Samantha Brown?)   You can also find listings for shows you may not be on your radar.  For example, you can find the listings for Buddy the "Cake Boss" and his Food & Wine Festival adventures.  You can also be sure to tune in (or not!) to watch Kate Gosselin freak out as her brood gets covered with melting ice cream in the Magic Kingdom.  HGTV and Food Network also have some great Disney specials that air through out the year.

I always set my DVR and file away those little gems for sick days, snow days, and the like.  And finally, for you park historians, you can find old episodes of sitcoms filmed in the Disney parks.  Old episodes of Rosanne and Sabrina the Teenage Witch regularly air and give you glimpses of the parks as they used to be.  (And let's face it, watching the fashion choices provide an whole other level on entertainment!) So head on over to Kirby Bartlett-Sloan's site and check it out.  Be sure to bookmark it so that it is handy to be the summer/winter/sick/bored/rainy day/IneedaDisneyfix blues!
Posted by Ginger 2 comments:

Email ThisBlogThis!Share to TwitterShare to FacebookShare to Pinterest
Labels: Get in the Mood

There's an App For That...Mouse Memo 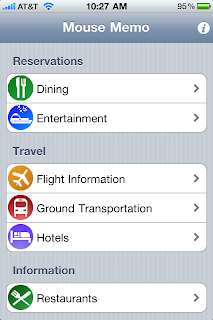 It is a fairly quite morning at my house...the slumber party guests have returned to there respective homes and we are all only a little worse for the wear.  To give myself a little morning pick-me-up I decided to sit down with my favorite new toy - my iPhone 4 (which replaced my old favorite toy, my iPod Touch.)  I recently made all of our December ADR's (Advanced Dining Reservations) and decided that I would spend some time getting all of my reservations and confirmation numbers loaded into Mouse Memo.
Mouse Memo is a nice little travel organizer.  The app is available from the iTunes store for $0.99, and is a nice choice for both iPod Touch and iPhone users as the majority of the app does not require wi-fi. The app provides a link to AllEars to view menus, which will require some connection to the internet to view.  The only difference for iPod vs. iPhone users is that you can make a call directly from the app.

Email ThisBlogThis!Share to TwitterShare to FacebookShare to Pinterest
Labels: the basics 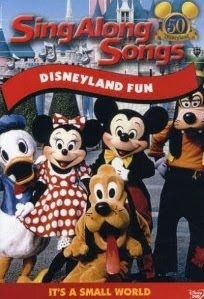 One my my kids' favorite videos for a long car trip is Disneyland Fun, a video in the Disney Sing-Along series.  The video features all of your favorite characters running around in the parks singing popular Disney tunes.  While the video is titled "Disneyland Fun" both Disneyland and Disney World are featured.  It is a great way to give a little one a preview of the parks.

One great feature for the young reader in your life is the words appear karaoke style on the screen.  They will be learning while they sing and they won't even know it!

This cute have hour video features12 songs sung by your favorite characters.  The video opens with "Whistle While you Work" as Mickey and company prepare Main Street for the morning rush.  Other highlights include a fast paced "Step in Time", a ride on Big Thunder and Splash Mountains to the tune of "Zip-A-Dee-Doo -Dah", a tour of Fantasyland during "It's a Small World" before concluding with "When You Wish Upon a Star" complete with fireworks set in front of Sleeping Beauty Castle.

I enjoy the video for a completely different reason than my kids.  The video appears to have been filmed in the late 80's or early 90's, and I can only look at the fashions and wonder "What were we thinking?"  I was a minor at the time, so I hold my parents responsible!  Big hair, mullets, scrunchies, and men in short shorts and "Hammer pants" are abundant.  The long lost Roger Rabbit is also a featured character.

While some things in the Parks never seem to change, this video gives you a peek at attractions gone by.  While it was nice to see the submarines and Skyway again, my kids wonder why they can't ride them!

In spite of  the dated look, "Disneyland Fun" is still worth your time.  You kids will enjoy the sight and sounds and you will enjoy reliving days gone buy.  You can take it home for $10 from amazon.com or you can add it to your Netflix queue!  There are several other videos in the series that I will feature in future posts.

Email ThisBlogThis!Share to TwitterShare to FacebookShare to Pinterest
Labels: Odd and Ends 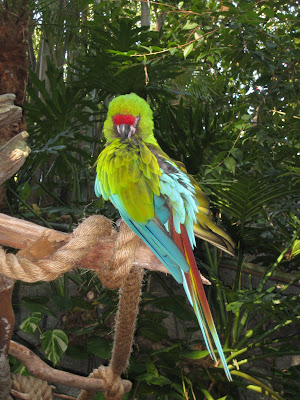 Email ThisBlogThis!Share to TwitterShare to FacebookShare to Pinterest
Labels: Photo

You Tube… For Disney Planning?

You know you love it! YouTube is the go to spot for the latest viral video or even a place to check out your cousin’s video from your family reunion. You Tube is also a great planning tool for your next trip to WDW! There are many great amateur videographers out there. While watching someone’s vacation video may sound like torture, there are some really great videos out there. You can find some nicely edited ones that include still photography, fancy scene cuts and even a nice background sound track.

It’s fun. It’s free. Check it out…and don’t forget to add your own videos. I’ll be watching!
Posted by Ginger No comments:

Email ThisBlogThis!Share to TwitterShare to FacebookShare to Pinterest
Labels: Get in the Mood, Keep the Magic, tips and tricks
Newer Posts Older Posts Home
Subscribe to: Posts (Atom)