And a spectacle it is! No Holiday trip to Disney's Hollywood Studios 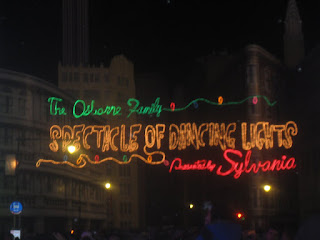 would be complete without an evening stroll down the Streets of America to enjoy this enormous display of lights.

As you wander down the street you may be surprised to know that the majority of the lights in the display were once part of a private "collection" owned by Jennings Osborne. A resident of Arkansas, Mr.. Osborne set out to fulfill his daughters Christmas wish of covering their home in lights for the holidays. Like my husband who will do anything to please his daughters a mere 1000 lights the first year was not enough. Each year, their display grew and grew. They even purchased adjacent properties to extend their Christmas passion. Over a million lights and many a traffic jam later, the neighbors (understandably!) had had enough. When the Osborne family refused to take down the lights, the local residents petitioned the courts for help. Fortunately, it was Disney to the rescue. An offer was made to move the lights to a permanent new home at Disney's Hollywood Studios.

Since 1995 visitors, including the Osborne family, come from all over the world each year to wander through the streets, sip hot cocoa, enjoy the Florida "snow", and admire the spectacular display of dancing lights while Christmas music plays all around. While most of the displays are original, the teams of decorators (that begin this huge undertaking in late summer!) have started switching over to more energy efficient LED lights.

This is a magical event that must not be missed if you are headed to the World in late November or December. A few tips...learn from my photography mistakes!  Photographing this event can be a bit tricky.  If you are going to take pictures look for special nighttime settings on your camera and bring a long a tripod, or steady your camera on something stationary. Also, be sure to WATCH WHERE YOU ARE GOING...especially if you are pushing a stroller. This is an especially bad spot for folks to be looking up and randomly stopping...Not that I ran over my husband with the stroller or anything...;)

And I did not notice it at the time, but isn't this picture odd?  There are lights everywhere, but on the tree...which is where most people put them in the first place!  Go Figure!