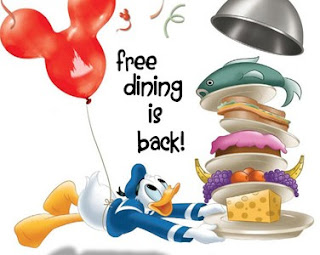 The free dining announcement announced this morning is even more delicious than the wildly speculated rumor circling every corner of the internet over the last week!  Disney has announced free dining dates for many travel windows through the end of the year and even into 2012.  The savings for this promotion can quickly add up, making a favorite for many guest (especially those staying in Value and Moderates.)  As an FYI, a hefty room discount is often the best promotion for those staying in Deluxe resorts (still no word on what, if any room discounts are coming.)
So here is the scoop:


You can book this discount from August 3 - Oct 29 pending availability.  A three night minimum stay is required as is a 2 day ticket.
This will be a very popular offer, folks!  Do not delay with making your plans.  If you are still tentative about your travel plans I would recommend that you go ahead and reserve your spot.  A $200 deposit is required to do so and it is fully refundable up until 45 days prior to travel when your final payment is due.
As always, I would love to help plan your Disney vacation.  As a reminder TMC Travel never charges a fee for our services and we offer a free gift for everyone in your travel party with the purchase of a 4 or more day vacation package!
If you have already booked a trip with me, be assured that I have spent the morning on hold with the Mouse having the discount applied to your existing reservation.  I will be contacting you with some good news soon!