Know Before You Go....Closures, Rehabs, and Refurbs 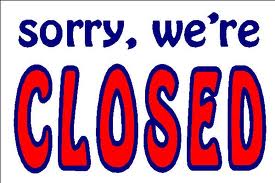 No matter what you call it, the result is the same.  You favorite attraction may be out of commission for your trip.  The only thing worse than finding out that you "must do" is undergoing a face lift before you leave home is finding out when head over to get in line.  If you have young children and said attraction is "The Many Adventures of Winnie the Pooh" then you may have a pint sized mutiny on your hands.

I highly recommend that you take a few minutes before you leave to read up on exactly which attractions may be closed during your stay.  And notice that I said "may".  It is not unheard of for a refurbishment to take longer than expected, so be sure to check out what may be scheduled to re-open just prior to your visit.  The good news is that you are more likely to luck out and find an attraction is open earlier than expected.  Sometimes Disney has a "soft open" after a major refurbishment (or before a major launch) to iron out any wrinkles before an official opening day.  These soft openings may be sporadic and only last for a few hours at the time, so if you see a favorite open unexpectedly, hop in line..don't double back later, as you may be out of luck.

While there are no absolute rules set in stone, there are some closures that you can predict...most of them water related.  Disney's Typhoon Lagoon Water Park typically closes for it's annual spiff up in November and re-opens in early January.  As soon as Typhoon Lagoon re-opens, it is usually Blizzard Beach's turn.  Splash Mountain is often off line in January as is Kali River Rapids at Animal Kingdom.  And it is likely no surprise that most work done to resort pools is done during the winter months.

Thanksgiving, Christmas, and Spring Break are super busy times at Disney World.  Disney seems to really try to have as much open as possible during these times.  And while I am a total "value season" kinda girl, the downside is that you are more likely to find ride closures and buildings behind beautifully painted scrims.  For our upcoming trip, I may have found the perfect balance...the little pocket of value season between Thanksgiving and Christmas...a low crowd time nestled in between major holidays.  Too much going on around the parks and too little time to bring too much offline!

So now you know...before you go, be sure to check for closure, rehabs and refurbs.  I really like to head over to Stitch Kingdom for the latest.  They also have a great feature that will email you if a closure is announced that may affect your trip.  For warned is for armed!
Posted by Ginger

Email ThisBlogThis!Share to TwitterShare to FacebookShare to Pinterest
Labels: Know Before You Go, parks